Before you know it, the clock will officially pass 11:59 p.m. on October 31, and all the jack-o’-lanterns and spooky ghosts adorning store windows will transform into colourful lights, snowmen and wreaths, marking the start of yet another holiday season.

For retailers, it’s unquestionably the busiest time of year. However, foot traffic won’t grow in-store with Holiday magic alone. You need to be strategic with a highly targeted approach to your target buyers. To capitalize on a season as big and bold as the holidays, you need to create an experience that will leave a lasting impression on your customers.

As everyone else sips a cold one by the pool, smart businesses are already determining how they’re  going to nail this season. It’s no secret that the retail industry experiencing a major shift, which means the pressure is on to show your stakeholders top-notch results — success starts with impressing your consumers, and impressing your consumers starts with stellar ideas.

Do you need to increase in-store traffic for the holidays? Download our step-by-step guide for bringing shoppers to your stores

Here are five examples for you to use to get your creative campaign juices flowing. We took inspiration from all over the world, and plucked a few examples from the regular retail season as well to offer you the widest array of ideas possible.

When you think of fictional holiday characters, who are the usual suspects? Frosty the Snowman. Rudolph the Red-Nosed Reindeer. The Grinch, maybe. The Tufties, of course…

Yes indeed, you may have encountered these fuzzy, anthropomorphic clumps of holiday joy as they permeated Cadillac Fairview’s shopping centres in their debut across Canada last winter. What started out as a two-minute short screened in movie theatres — as a way of introducing the characters and their love for gift-giving — drove potential mall-goers towards a full-on holiday experience for all ages spanning across multiple platforms.

The centrepiece of it all was the Magic Gift Workshop. Patrons could not only shake the hassle of gift-wrapping by having The Tufties magically do it for them, but their kids could also explore interactive play zones, take part in an augmented reality treasure hunt or pass the time with an AR colouring book, all featuring the loveable furballs.

The twenty CF malls which participated in the five-week campaign, pulled in an average ROI of 65% to go along with a 14% increase in foot traffic during the most crucial shopping season.

If you’ve ever thought installing a Pinterest button in the top corner of your browser was convenient, try having one at your disposal in real life.

Brazil’s largest design furniture retailer Tok&Stok teamed with Sao Paulo-based ad agency DM9DDB to create a combined in-store/digital experience, filling locations to the brim with wireless, push pin-shaped “Pin It” buttons that customers could use to save inspiring items to a Pinterest board while browsing around.

In order to make their devices be detectable, customers first had to download an app called “Pinlist.” Each physical button was placed alongside a corresponding item and, when pressed by someone, would trigger a connection and pin said item to that person’s Pinterest account.

Not only did the experience allow customers the childlike satisfaction of pressing the novelty buttons, it gave them an opportunity to keep certain pieces of Tok&Stok’s furniture top of mind, naturally with the intention to encourage them to return and purchase them at a later date.

Not typically known for having any kind of physical retail presence, juice purveyors Minute Maid decided to open a store just in time for the 2016 holiday season, in order to sell well… nothing.

Appropriately named “The Holiday Store with Nothing to Sell,” the brand’s pop-up location was  set up as part of their #doinggood campaign. The goal — aside from creating positive brand association — was not to gift patrons with bottles upon bottles of neatly wrapped OJ, but to give kids of any age the opportunity to write a meaningful letter as a Christmas gift to their parents, reminding them that they’re appreciated at what can be a very stressful time of year.

While it’s unknown how many letters were written, it’s a safe bet that more than a few tears of appreciation were shed by parents who received this little piece of holiday magic.

For some, the prospect of shopping isn’t always a particularly thrilling one. As The North Face has learned over the years, however, throw in an element of surprise or a tinge of risk, and you’ve got yourself a whole new ball game.

Last year, the popular outdoor clothing company opened a pop-up store in South Korea, inviting everyone to come in and snag a free jacket — that is, everyone who was willing to zipline 200 metres across open water and through a series of paper signs to go get it.

While the challenge was initially unnerving for some, it ended up proving to be an adrenaline-pumping in-store experience for customers. And, hey — who doesn’t like free stuff?

Italian culture has given the rest of us a bevy of wonderful things in which to indulge, from food to fashion to wine and back to food. (Because we always go back for seconds.)

For “Britalia” stores in the United Kingdom, Ireland and abroad paid homage to Italy’s Renaissance architecture, transforming into  sets from a theatrical production, with hand-painted columns, candelabras, and a hint of clouds and stars to add some whimsy. Certain stores also held special events for customers, including wine tastings, Italian cinema nights and masterclasses on how to make certain cocktails and dishes.

How SweetIQ’s Local Data Will Catalyze Your Success

Behind every brilliant marketing plan, there’s a ton of data mining. Local data allows brands — both big and small — to gain deep insight into consumer behaviours, particularly in the online-to-offline buying funnel.

SweetIQ’s Local Hub can give you analytics such as who’s searching for your store and when, your peak store hours, busiest stories, to name a few. Leverage this data to make targeted campaign decisions, to ensure you’re appealing to the right people at the right time, and ultimately driving customers to your doors to see what holiday magic you have waiting. 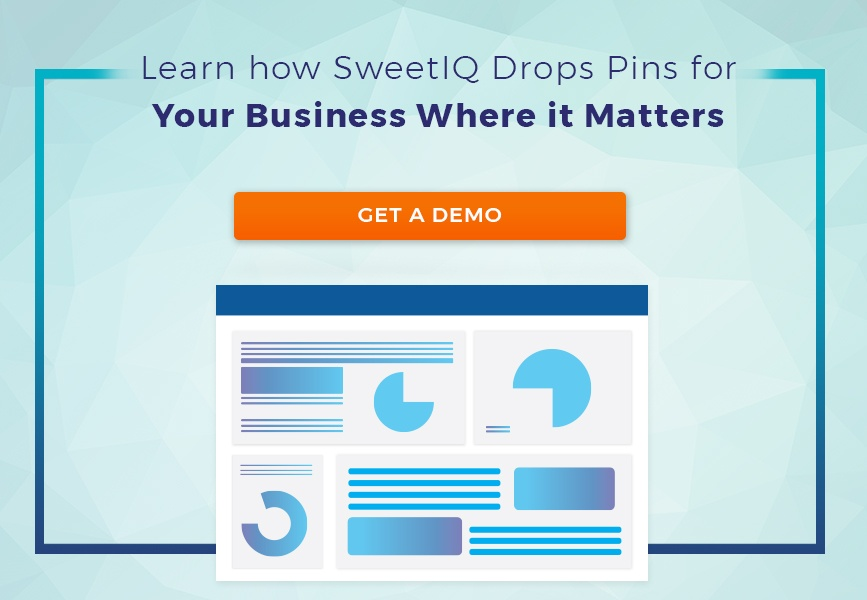 Claim Your Space on Bing This Busy Holiday Season