Steven Dahan evokes the SweetIQ DNA through and through. As Head of Business Development, Steven has seen SweetIQ’s growth from a small company of four in a tiny 800-square foot office (he was the fifth team member) evolve into a thriving business anchored by a sophisticated SaaS platform.

While we’re tech geeks through and through here, for Steve, it’s all about the customer experience. Read on to see how he got his start at SweetIQ and what makes him a true #LifeIQ ambassador.

Tell us a bit about where you’re from.


What were you doing in California at 22?

You could say that I really dove into my professional life quickly. I worked in the financial and movie industries, which were both great experiences to learn how to connect with people. At first, I was running a private brokerages office. Next up, I was raising money for independent films. I raised all of the funding for a movie called Beautiful Boy and a few others.

After that, I ran a company called Team Buy. Similar to SweetIQ, I was the fourth or fifth employee. I was responsible for brokering the largest online deal in Canadian history at the time.

That’s a lot of success at a young age. How did you become so successful in your career that early?

I’ve always been a great people person – it’s one of my natural strengths. I can read people very well, so I can understand what they need, and mirror them in a complementary way. I know how to make people feel comfortable and valued when I speak to them about something business related.


Who’s been the biggest influencer in your career?

I’m really close with my cousin, who’s made an incredible career for himself in California. I watched him build an empire from clothing lines to nightclubs, and it was all rooted in strong relationships and understanding people. I’ve always looked up to him.

Tell me about your start at SweetIQ. What brought you from California back to Montreal?

Most of my family lives in Montreal, so I decided it was time to go back to my roots. I saw an ad for SweetIQ, applied, and went in for a cattle call job interview and got a role in sales, along with a few other people. 2 or 3 months in, it was just me in the sales department, and it remained that way for a little over a year. Needless to say – a lot has changed!

What’s your favorite part about the product?

The feeling that the client gets when they realize that local data, directories and reviews are no longer something they have to deal with. They’re always so relieved to have the headache fully taken care of. There’s the added bonus of choosing us. A year and a half into the relationship, they’re getting a lot of credit for a spike in exposure.

Can you tell me about your favorite piece of feedback you’ve ever received?


That working with SweetIQ is like having someone directly on their team, because we’re attentive and involved. We aim to treat everyone we work with like people rather than clients, and that’s key.


What’s your favorite memory of life at SweetIQ?


Closing my first big client! I’m sure anyone who works in sales will have that answer for you.


If you had just one piece of career advice to give someone, what would it be?


In the summer, up north in Estérel on the lake, on a boat. In the winter… you’ll find me back in California. 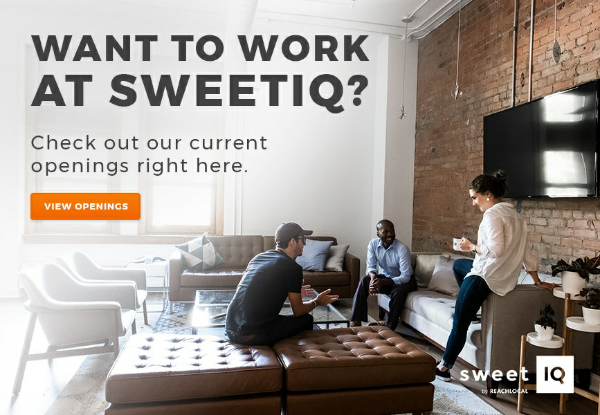